Alnwick Harriers are pleased to announce the roll over date for the Coastal Run in 2022 as the 24th July with a start time of (approx) 9am, to coincide with the tide.

For all those who signed up for the planned event in 2020 we would ask you to check your personal details with Results Base https://resultsbase.net/ to ensure they are correct. All those signed up are automatically rolled over to the event in 2022, you do not need to re-register.

There will be a small number of places that will go on release in January 2022 and would suggest anyone interested to follow Alnwick Harriers Facebook page or website for details of how you apply for them nearer the time.

The following photos are with kind permission of Dan Mallen who has managed to take some amazing shots along the route you will be taking on your way from Beadnell Harbour to Alnmouth Beach. 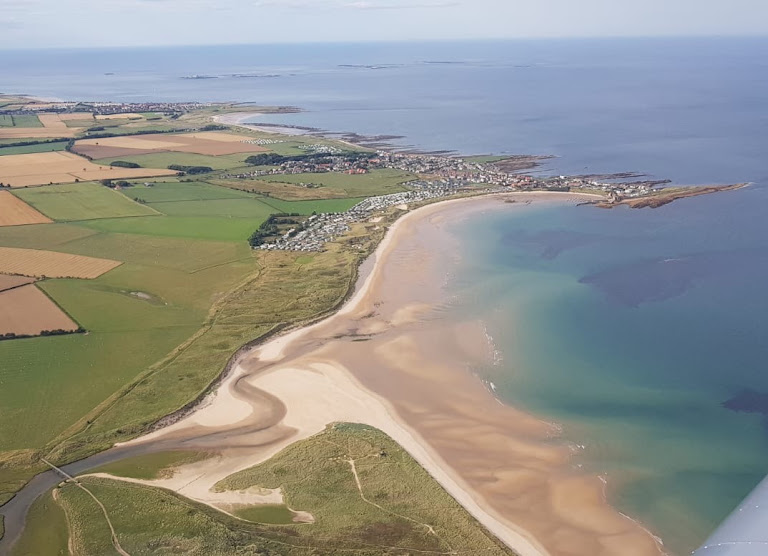 Beadnell Bay….be prepared to get your feet wet!!

Looking back to Beadnell…first bit of the beach completed!! 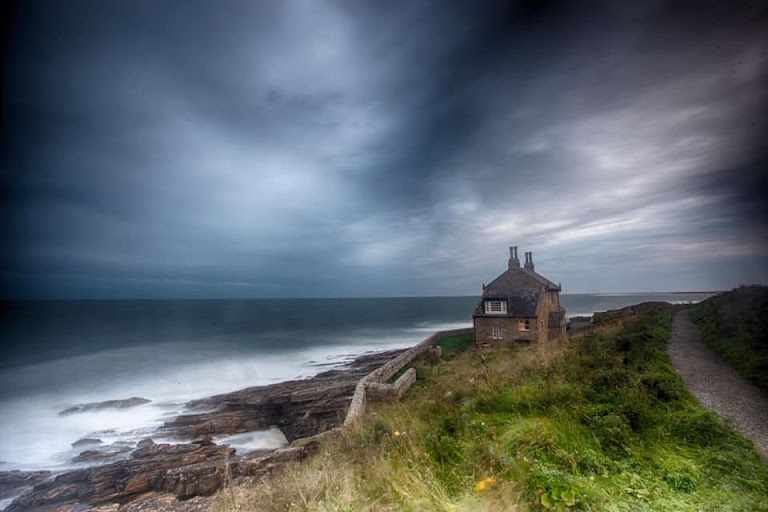 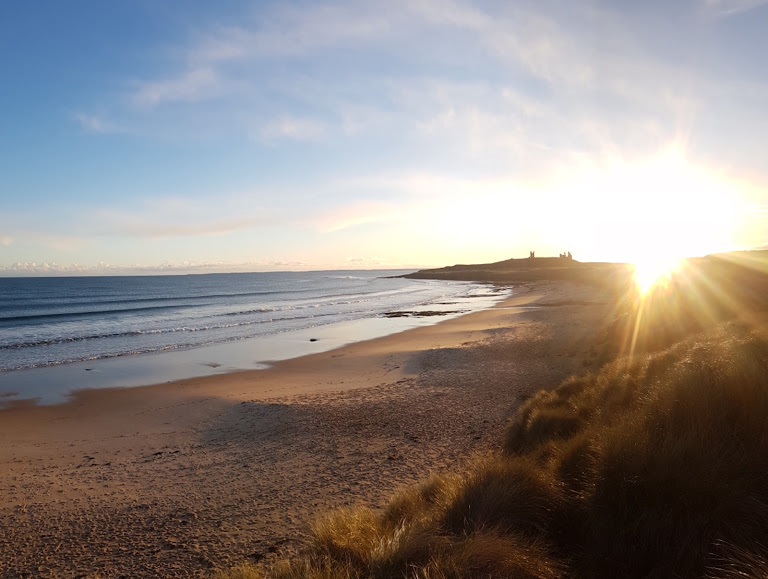 Dunstanburgh Castle in the distance….nearly half way!!! 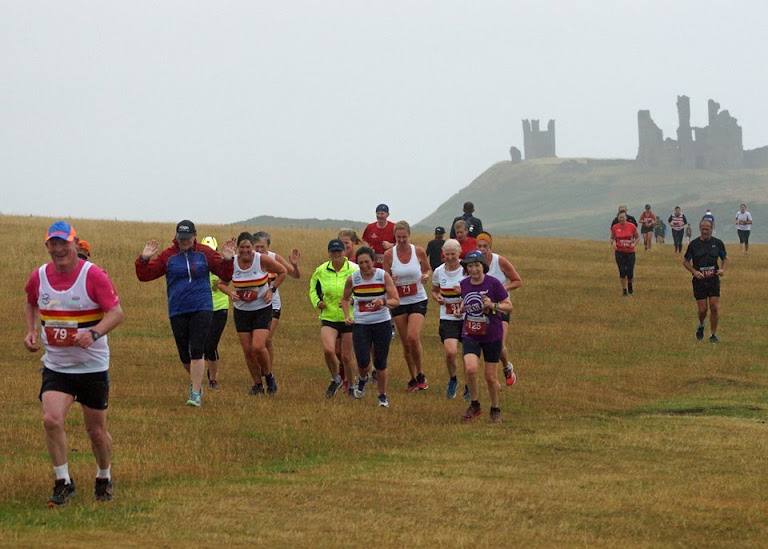 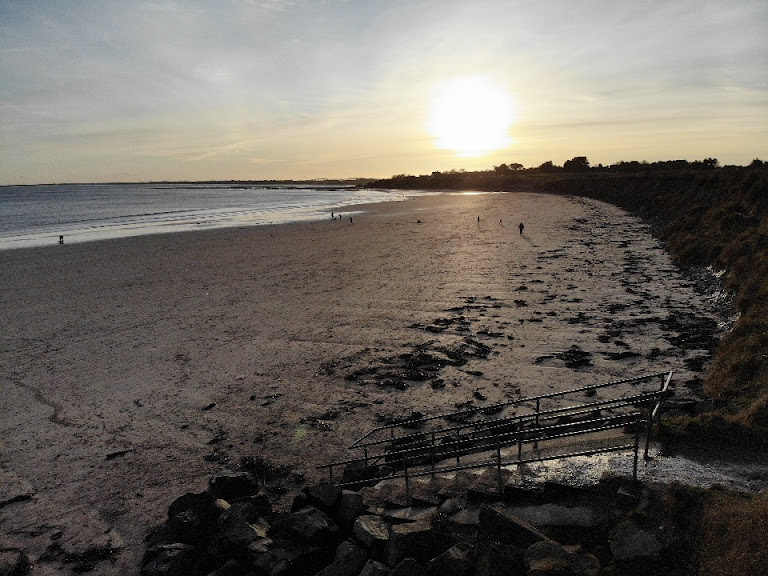 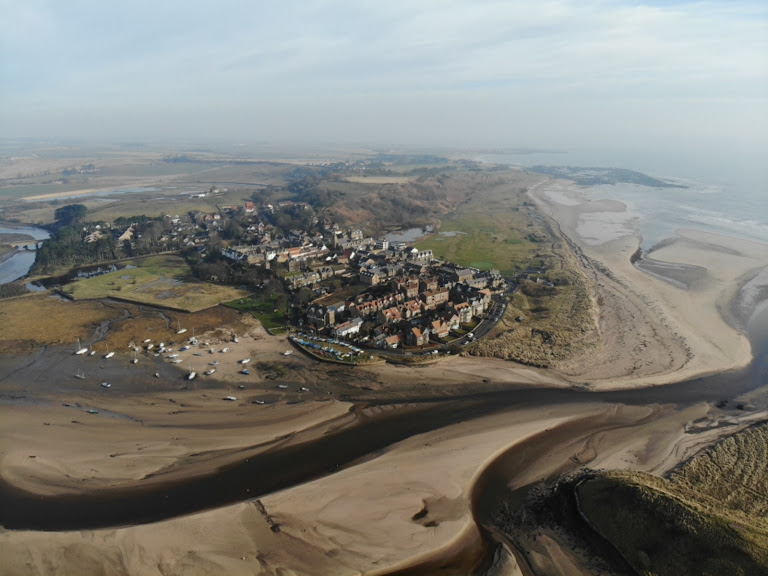 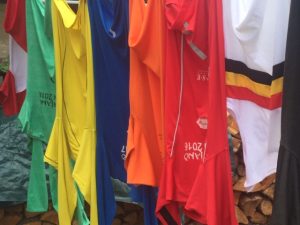 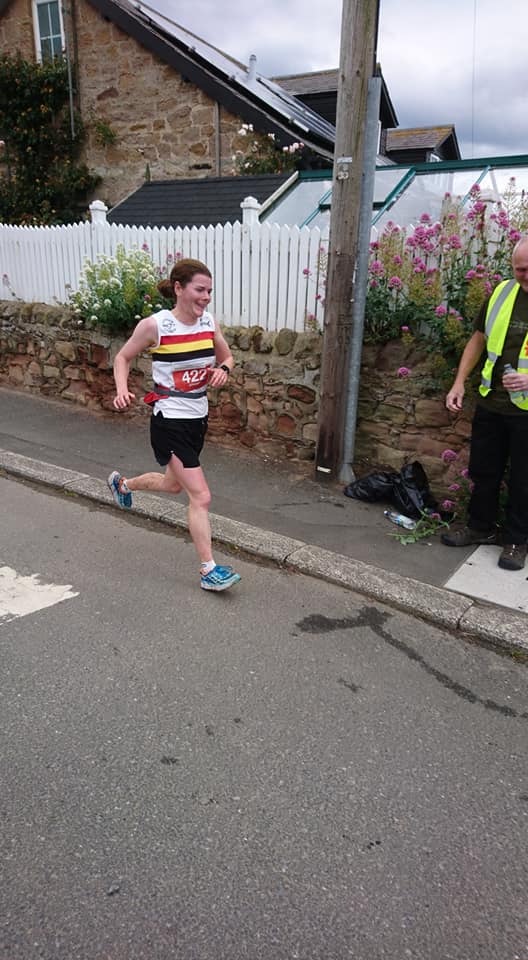 Sunday’s event marked 40 years of the race and the guest of honour was Archie Jenkins who initiated the event all those years ago and was also the first winner.

He kindly started this year’s race with a few words explaining that there were 12 people in the first race and over the years it has expanded, with 1,250 people registering each year to take part.

Archie then joined the race to compete, he also adjudicated the event, what a hero! He is pictured below (Morpeth Harriers vest) with Laura McLean, race director, and chairman of Alnwick Harriers, David Hindmarsh. 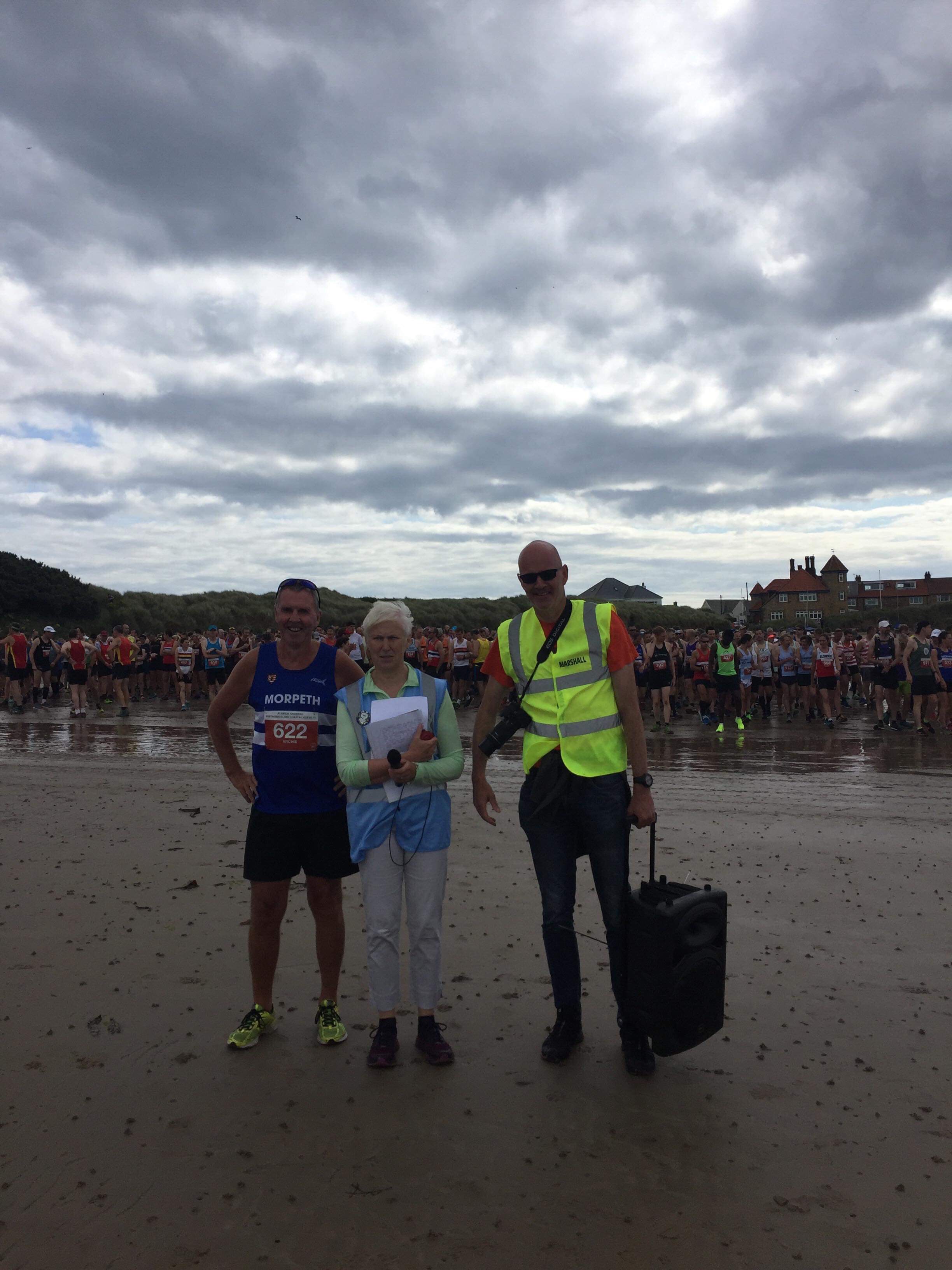 The Alnmouth Village Golf Club came up trumps providing refreshments, a marquee for our presentation and a great place for runners and spectators alike to gather at the finish.

First Aid was covered by Rapid Reaction NE Ltd who thankfully did not have any serious medical conditions to deal with.

Parking was provided by the Alnmouth Football Club and the Burgage Holders on Alnmouth Beach. It was such a busy day for them but a big thanks for all the hard work.

Also thanks to the National Trust and Landowners for allowing us access to their beautiful sites.

A huge thanks to all the spectators who came along to cheer on family and
friends. It makes such a difference to our competitors and is really appreciated.

Praise for this year’s Coastal Run

A number of runners have written in to praise this year’s event.

“I just wanted to thank you again for the place in the run. What an amazing run. The scenery, organisation and the marshals were outstanding and the course incredible. I agree with my dad that it’s the best run I’ve ever done and I run many off-track ones.

“My dad met me at the end and at 83 brought back all the old memories of the 10 times he had completed it many years ago.

“I’ve attached a photo with him from the end.” 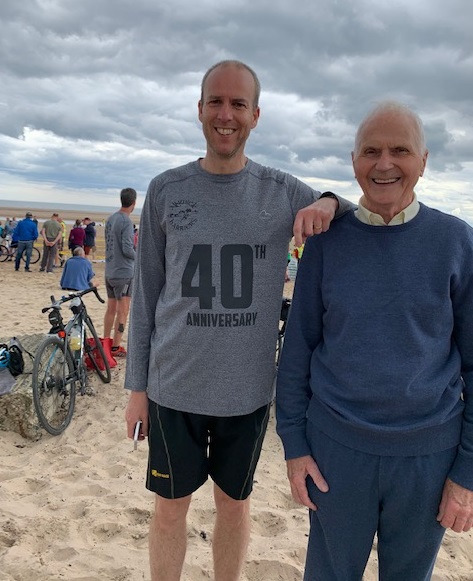 “Thank you for the great organisation. The day was awesome for many reasons but mainly due to the option of starting at 9.30.

“I was very hesitant about asking for an early start but for me it was absolutely the right thing to do. I thought the front runners might be a bit irritated by slow runners getting in their way but the support I got from them was fabulous! Verbal encouragement and support as they passed pulled me along. It was unexpected but so lovely!

“Another brilliant result of the early start was that my youngest son started with the mass and caught me up on Seaton sands just about 1 mile from the end so we finished together, not something I thought I’d ever be able to do again.

“On a slightly sour note I thought the group that went off early because they had left their dogs in the cars in Alnmouth were highly irresponsible and abused the opportunity.” 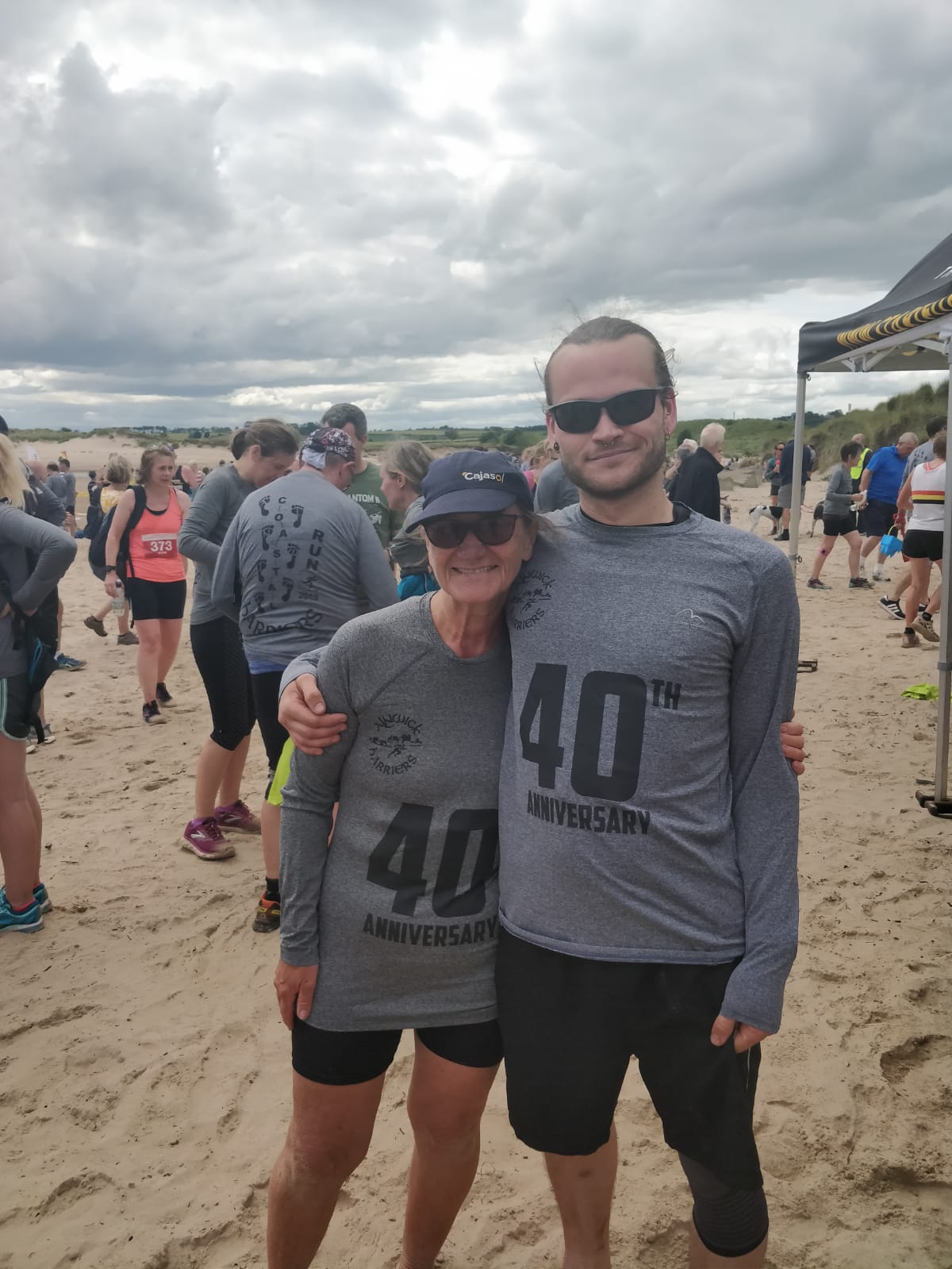 Here are the results for the 2018 Northumberland Coastal Run, held on Sunday 29th July…https://resultsbase.net/event/4251/results.

Many, many thanks to the superb marshals who cheered on the participants so well despite the grim weather! And of course many thanks to race organiser Tracey SAMPLE who did a fantastic job in organising another great event. The committee would also like to thank several organisations who made the race possible including Rothbury Motors, Alnmouth FC, The National Trust, Rapid Reaction, Alnmouth Links Golf Club and Hipsburn First School. Finally well done to the runners who braved the rain and headwinds!! Hope to see you again next year! 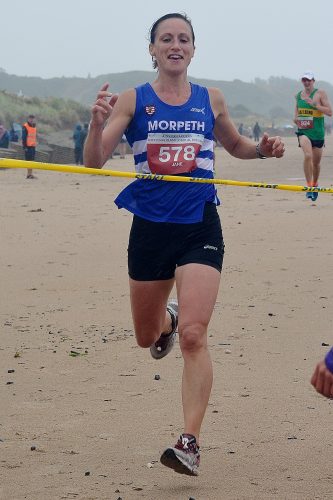 Well done to the race winners who were Tyne Bridge Harrier Tom CHARLTON and for the 2nd year running Morpeth Harrier Jane HODGSON. Tom was the clear winner of this race for his first time, finishing over 3 minutes ahead of 2nd placed Ross FLOYD of Morpeth Harriers. Stephen JACKSON of Elvet Striders was 3rd, ahead of our very own Dan TURNBULL who retained the 1st male Harrier shield. For the women Jane won the event for the 2nd year on the spin, finishing just over 6 minutes ahead of Horsforth Harrier Aisling WALL. Former winner Judith NUTT was 3rd, whilst Alnwicks first finisher was Laura STUBBINGS, having a rare run in a Harriers vest! 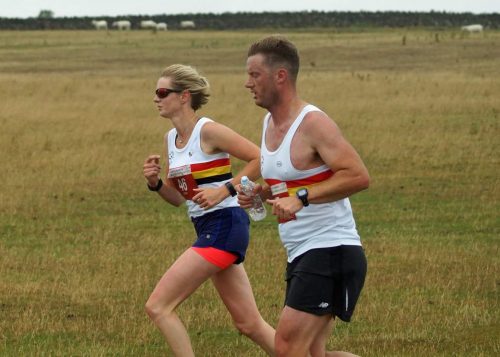 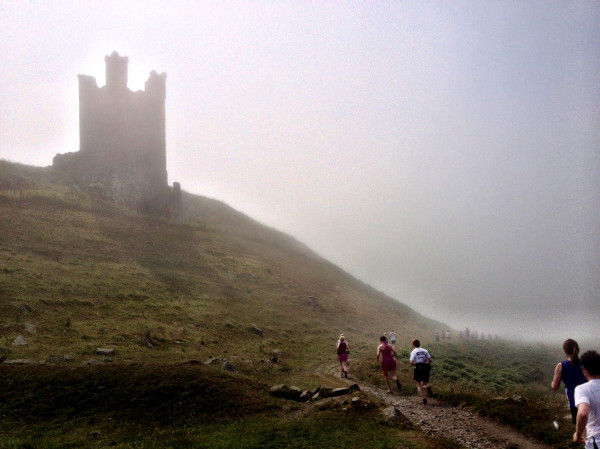 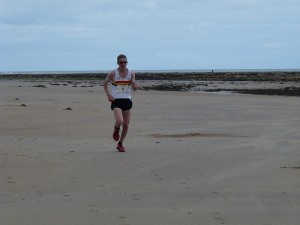 The first ever Beadnell to Alnmouth Race was held 1979, there were only 12 competitors. In the beginning competitors had to choose their route starting in the sandy bay next to Beadnell Harbour and then heading south running to Alnmouth (approximately 14 miles). The winner of the first race was Archie Jenkins who runs for Morpeth Harriers. The winning time was 1 hour 22:30.

In the first two to three years many changes were made to the route as runners found the short cuts and quickest routes. Apart from one or two sensitive areas the course is unmarked and competitors are responsible for choosing their own route. The course is however, now well established as it makes its way from Beadnell to Alnmouth using public footpaths and roadways. The course which most competitors choose to run is approximately 14 miles long (depending on whether the tide is in or out) and makes its way as follows: 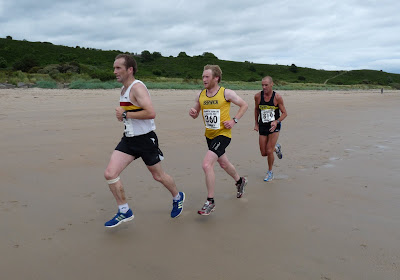 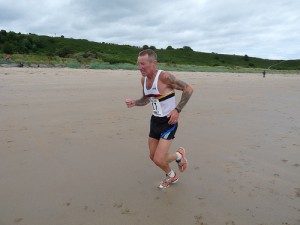 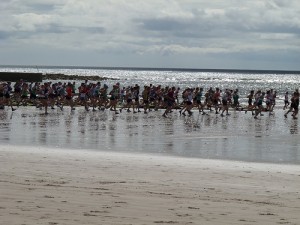