The alternative torch relay was thought up by Endurance Life, the idea was to have an event which involved carrying a torch all the way non stop around the entire length of the official route. The organisers set up a website posting the details of the 8000mile route encouraging people to sign up for 10-12 mile stretches. It is down to the individual runners to arrange their handover points with fellow participants.

By the time I found out about the event all the ‘legs’ in Northumberland had gone so I grabbed the next closest one: Beaumont Hill to Whinney Hill! It sounded quite challenging and picturesque! It was ‘interesting’; when I found it on the map and plotted the route I found it went right through the middle of Darlington!

I wasn’t feeling too enthusiastic about the whole thing until I looked out my front door at 11.20pm on the Friday before my leg on the Monday and saw the torch go through Hipsburn ‘ bang on time’! I was over awed by the miniscule attention the event was attracting (I suspect I was the only spectator that night!), yet it was actually happening!

So I emailed the runners who were before and after me and checked the train times to Darlington. On the Monday I got down to Darlington early and did a bit of sight seeing (it’s actually quite a nice town!). Colin, a friend of Chris who I was taking the torch from kindly picked me up from the town centre and took me out to the handover point. Chris arrived  pretty much on time, we took a few photo’s then I set off with the ‘torch’. It looks more like a light sabre with a big yellow GPS transmitter strapped to the end of it!

I’d come prepared and had a day sack full of ‘everything’. I attracted a lot of stares but was confident nobody had a clue what I was doing as I ran through roadwork’s, across roundabouts and down dual carriages the wrong way. I thought I had ‘bags of time’ to complete my twelve miles until I headed out of Darlington on the wrong road! Panic set in when I realised I’d run off my tiny map and had no idea where I was. Fortunately an old lady pointed me in the right direction down the A66 and I got back on track before real damage was done!

I arrived at Whinney Hill to meet ‘Claire’ with 5 minutes to spare, she too had no support team (only a big bag!) so we had a quick chat and off she went.

That was it! No glory, no medals, no T shirt, no crowd but a fantastic day out! It was really good to be part of something that has relied entirely on people getting together, talking to each other and just getting on with it!

The ‘relay’ torch is due to catch up with the ‘official’ one just before they both arrive in London! 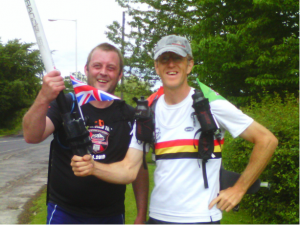