It was a busy weekend of race action for Alnwick Harriers. Here are the results.

Many of the athletes and their parents set themselves the task of baking cakes which were sold on the day to raise money to help support the event.

It was a brilliant start to the season for the Blyth and Alnwick combined team who managed to win the event and take the league lead scoring the most points.

The club had success across the full range of track and field events.

Eight athletes competed for the first time demonstrating great confidence and determination scoring points for the team and contributing to the overall score.
Many of the experienced athletes achieved early season personal bests and a significant number achieved top three placings.

The throwing events provided most successful for the club. Harris Hall and Leila Thompson won the U13 javelin and Antje Hall set a new club record of 25.35m winning the U17 women’s competition.

In the Shot, Euan Friend and Talia Thompson won the U15 boys and girls categories and then they both also won the discus setting new club records of 23.34m and 20.94m!

Maddy Hall (U17) had an excellent day establishing new records in both the discus (16.39) and the hammer (20.97), Maddy was runner up and winner in these events.

Finlay Telfer (U15) won his hammer throw beating his own club record with an excellent throw of 18.80m. An excellent set of results!

The club had an excellent day and secured a good victory which was the result of fantastic teamwork.

The final match result was: 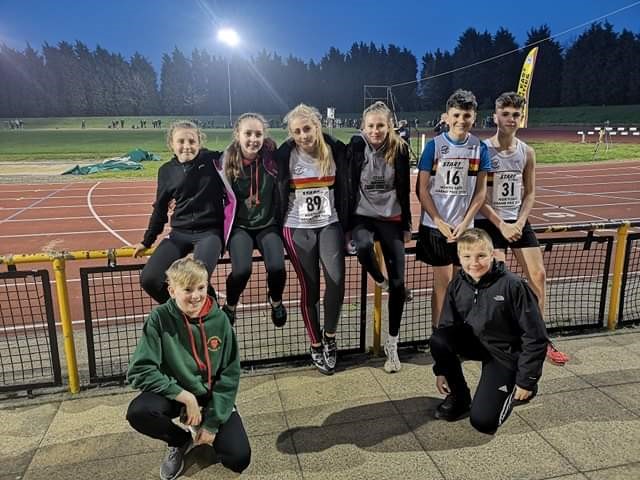 Junior and Senior athletes compete in a range of events over the summer months.

Athletes in the track events are graded by personal best times so race heats can be fairly contested. In the field events age categories are grouped to enable the competitions to be run in a shorter evening fixture.

Eight Alnwick Juniors took part on this occasion and there was fierce competition in the sprinting, jumping and throwing.

Ollie Telfer had an excellent race in the 1500m posting a personal best time
and club record of 4min 23.4s.

There are five fixtures still to be contested and the athletes are looking forward to even greater success.