The Coastal Run is fast approaching with our committee putting the final details in place to ensure you all have a safe and positive experience .  The cut off date for all transfers being the 29th May 2022 so please ensure they are all completed by that date as there is no extension available.

Please also note there are no options to rollover your place till the following year or to add to your order as transport and t-shirts have already been ordered.

Jim Allan made up the male team and must have had his eyes closed because he ran straight into a GIANT concrete bollard 10 seconds after the start. Despite falling he made his way back through the field to finish in 4th place (42:00).

If any club members are interested in taking part in the Weetslade Relays, please email Diana Weightman at diana.weightman63@hotmail.com

See below for further details 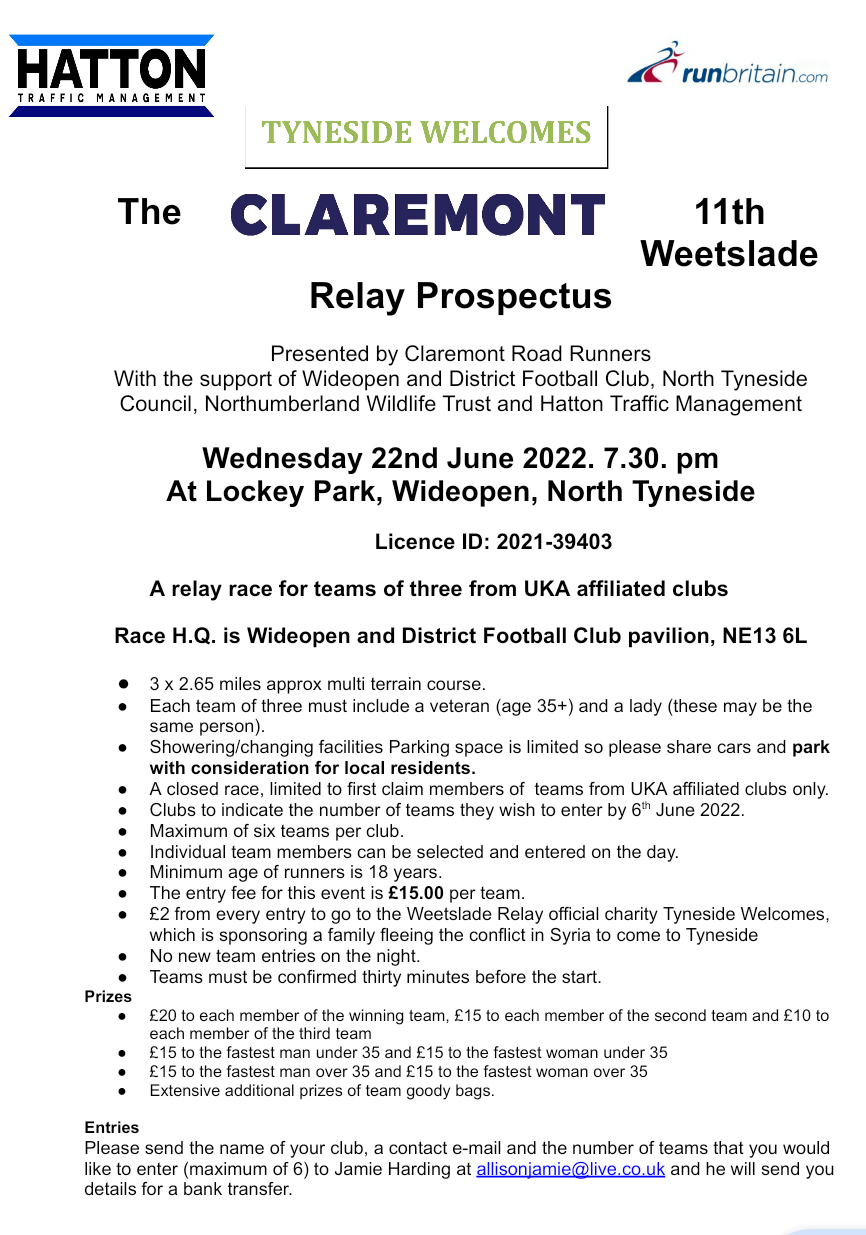 It was a glorious day for the Port of Blyth 10K which took place on Sunday. Four Alnwick Harriers were on the start line, along with over 700 other runners. Conditions were perfect and resulted in a PB for Karen Leeson, who completed the course in 50:04; carving 4 minutes off her previous PB. The first Alnwick Harrier home was Mike Henry who had an excellent race resulting in him coming first in the V70 category with a time of 49:19. Hot on his heals was Andy Squires, completing his first race in three months after coming back from an achilles injury, with a respectable time of 51:05. The final Alnwick Harrier home was Tim Broomfield with a commendable time of 55:58, who was returning after a prolonged absence.

In a field of 330 runners, Liam MCDONOGH and Harry KNOX both had superb runs over the 4395M course to finish third and fourth counters respectively for their team, helping Northumberland through to fifth place. Well done lads!

Alnwick Harriers turned out in force for the final, and best, cross country of the season, which just happened to be on home turf. We were facing relegation through no fault of our own, so it was vital that we put in a good performance, and we did not disappoint. Unfortunately, despite the valiant efforts of all 12 runners, including Dave Hindmarsh who seemed to be enjoying the lovely weather and scenery as he sauntered round (just joking Dave ), it was not enough to keep the team in Division 2.

I would like to thank everyone for their efforts this season and hopefully we will all be back in September to fight for promotion.

The grand finale of the NEHL series was held at the Pastures in Alnwick, in the shadow of Alnwick Castle. With what is undeniably one of the most picturesque backdrops, the route sets out across open fields before climbing a series of hills up to a woodland section. The course was in good condition, with the trees that had fallen victim to recent storms having been cleared from the route and the ground generally firm underfoot. Emerging from the woodland section, there is a steep descent leading down to the flat, fast finish area. On the day, a lively crowd had gathered beside the tented village and it was great to be cheered in by a home crowd.

Six women turned out to run for Alnwick Harriers, with several team members unfortunately unable to run due to injury or other commitments. However, there is always next season and the team is always on the lookout for more runners of any speed.

Alice Tetley-Paul was the first Harrier home, running from the slow pack and finishing in a time of 36.06. Jo Powell followed not long after, running from the medium pack in 37.26 (35.06 actual time). The final two counters were reliable slow packers Karen Mather in 39:24 and Jennifer Knight in 41.54. Supporting team members were Emma McGee, who finished in 43.23 on her first appearance this season, and stalwart Linda Patterson, who finished in 47.56.

Well done to everyone who took part in this race and any of the other races this season. Overall, the team finished this season in 13th position in division 3, with some great performances, a smattering of mud, a lot of grit and plenty of fun!

Great effort at the Alnwick Cross Country by the juniors. The U11s raced well with top performances by Andrew, Alastair and Lachlan finishing 3rd,4th & 11th and Emilia & Alicia 5th & 8th. Mary & Aimee were our only U13s, well done girls

. The U15 girls were our top team finishing 3rd. Excellent teamwork by Molly, Lilia and Xara. Liam and Jack represented the U15 boys with Liam McDonogh posting the fastest Alnwick time of the day 13:31

Sole representative for Alnwick Harriers, veteran Dave Richardson travelled down to Hampstead Heath, London yesterday to take part in the National XC championships on the iconic Parliament Hill Cross Country course. On a 12Km cross country course, which was muddy, hilly and waterlogged, he came 383 in a time of 51mins, out of a congested field of over two thousand! Well done Dave, you have done Alnwick Harriers proud!

No surprise after storm Arwen, the trees have been devistated up on Simonside so the race had to use the “bad weather route” of 14.5km rather than the 16km route that takes in the Forrest.

After all the wind and rain, there was about a four hour window where the running gods allowed us to go up from Rothbury on to the top of Simonside in almost perfect conditions. Perfect conditions up there is no wind blowing you off your feet and no precipitation. It was almost still and the view of the long line of head torches winding their way up past lordenshore car park and up on to Simonside was as spectacular as it gets.

We were already into snow before getting to Lordenshore (2miles) from the start so we knew up on the top the flagstones were going to be sheet ice. I’m not sure a single competitor of the 263 finishers got round without falling over and the descent from Simonside cairns was particularly slippery. The run was accompanied by constant shouts of “ice” coming back down the line.

The Deurgar had been out with some sort of shovel to make a trap for unsuspecting runners. The flagstones were too slippery to run on but the peat at the sides of the stones was very boggy after 2-3 days of heavy rain and snow. Indeed, Steve Cowell fell into the Deurgar trap and he was amongst a number of people who had to be hauled out the peat bog as they were chest deep!! Once off the stones, the last 2 miles run down in to Rothbury is great fun. Some of us had big cheesy grins on our faces whilst flying past everyone but the sting in the tail is the finish line is now up a set of steps that you genuinely think you are going to die on and you are only 50m from the finish line.

5 Harriers went up there but there were so many locals and familiar faces, it was great to be out there and Cold Brew Events do such a good job of putting these spectacular events on. It is definitely my favourite race of the year. The male race winner, Sam Bandeen finished in 1hr 11 min with the female race winner Georgina Lewis clocking an amazing time of 1hr 25 min.