A call to arms from our men’s XC Captain, Bruce Crombie

The Northerns take place on the 25th January 2020 at Camp Hill Estate, Kirklington, Bedale.
The Nationals take place on the 22nd February 2020 at Wollaton Park,Nottingham.
Any lads lads lads wanting to do these, please note that they are both stand alone events. You must let me (Bruce) know by the 10th January by emailing me at brucecrombie1972@gmail.com if you want to be registered.

A big commitment I know, but Dave, Stevie and I did the Northerns and I did the Nationals last year and it was great to see so many great top top athletes including our own Carl Avery battling it out. Well I didn’t actually see as I was about 3 miles back but I’m sure it would have been great.

Due to weather related parking issues, this was only the second Harrier League fixture of the season. With ample parking at County Hall, only the course could get this fixture put off. After running yesterday I now think they’d only cancel it if their were 10 foot snow drifts or a bomb hit the course, which is probably how Aykley Heads looks this morning.

It’s been roughly 9 months since the Turkey Baster was used for less traditional methods in the Simpson household, so Graham was housebound waiting for the birth of their second child.

We arrived to find what was less of an athletes village and more a refugee camp:
Kids crying looking squalid and dirty, misplaced adults with heads down just looking for a better life or at least the rain to stop.
It has to be said the course was relentless with mud everywhere and huge kudos to anyone who attempted it.

The lads lads lads did brilliantly though finishing top of the Division 2 teams on the day.

Ross Wilson, who I imagine looking like a cross between a marauding Viking and a male model, gleefully gliding over the mud to finish a fantastic 27th closely followed by the ever reliable Steve  Carragher. Both move up a pack.
Big Dave next, outstanding performance to put his yellow brolly down long enough to finish 53rd with the 13th quickest time of the day. As they say up that way cushty, barry,  chugh! (Berwick is a strange place!)

Next was Tom Harper, well done young un, putting a shift in for his new club. Then it was my running hero, Adam Fletcher who surfs in the morning, turns up, does race, goes home! And he’s been doing it for years. He is surely only a haircut away from being Alnwick’s poster boy. Mike Telfer was our sixth last counter. Considering he’d been there all day with the juniors, that was a great run.

Onto the rest of us. I have always said the non-counters on the day are as important as the counters and now I no longer count, they are even more important. Big Phil Hall left me for dead then the fantastic young runners Ben and Max Murray Johns “dad”; Rob.

Last in was another new lad Mark Barr who we thought had hopped on the back of a lorry to Dover, but had actually ran as back marker and was good enough to bring the tape in at the end. Honestly though great to see you Mark.
Must mention Paul Dellbridge. Dell boy had to pull out through injury on the last lap – I hope it’s nothing serious.
Unreal team effort from EVERYONE connected to Alnwick Harriers and big shout out to the marshals, other club runners and organisers, top top job in horrible conditions.

Onto the North Easterns! 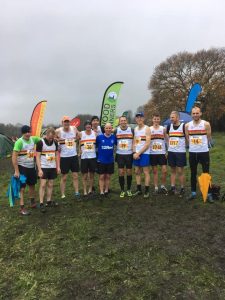 Alnwick’s senior women had a good turnout on Saturday at the North Eastern Harrier league at Aykley Heads, despite many of the cross country regulars opting to save themselves for the deciding 10 mile grand prix race at Kirkley the following day.

Aykley Heads is widely acknowledged as one of the more challenging of the north east cross country venues and the horrendous weather made course conditions particularly difficult. With eight junior races having been run before the senior women’s race, the course had been well churned up, making for some tricky technical descents through the mud and boggy, energy sapping climbs. In her first cross country season, Emma Givens continued her recent strong form to be first home for Alnwick. In her first race of the season, Emma McGhee was second counter, backed up by Justine Norman and Tania Conway.

Credit is due to everybody that braved the conditions to run and thanks to all of the superb officials and marshalls who endured the rain throughout the day, ensuring that this harrier league fixture went ahead.

Thanks to John Ross as ever for tremendous work in updating our Agrand April.
Well here it is the last Grand Prix race completed, just the final update after Alnwick Pastures parkrun to go, as always thanks to your help.
The last race in the 2019 season at the Northumberland 10 Miler  has seen the top 5 completely change!
Congratulations to Diana Weightman moving from 2nd into 1st position, Tim Falconer moving into 2nd, David Hindmarsh into 3rd and Louise Callaghan into 4th. This has resulted in our long time GP leader Lisa Baston moving to 5th position. Lisa could been seen muttering about ‘old people’ and looking towardsTim, Diana and David as she left Kirkley Hall.
Well done also to Jo Powell who moves from 10th to 7th after winning the F45 category at the 10 Miler  and Mel Steer who moves into  trophy position 12 from 18th place.
There are two Alnwick Pastures Parkruns left before the 2019 GP comes to an end on Saturday 7th of December.The Trophies will be presented on the Evening of the 11th December after the annual Parlouf competition.
Posted in News | Leave a comment

Posted on November 20, 2019 by James Willoughby

There have been two movers in the 2019 Grand Prix.

Seasonal campaigner Tim Falconer has moved from seventh to third following his 1.10 at Sunday’s Brampton to Carlisle 10-miler.

Meanwhile, Grand Prix maestro David Hindmarsh notched a 3.48.47 marathon in the USA, helping him to climb from 11th to 6th. 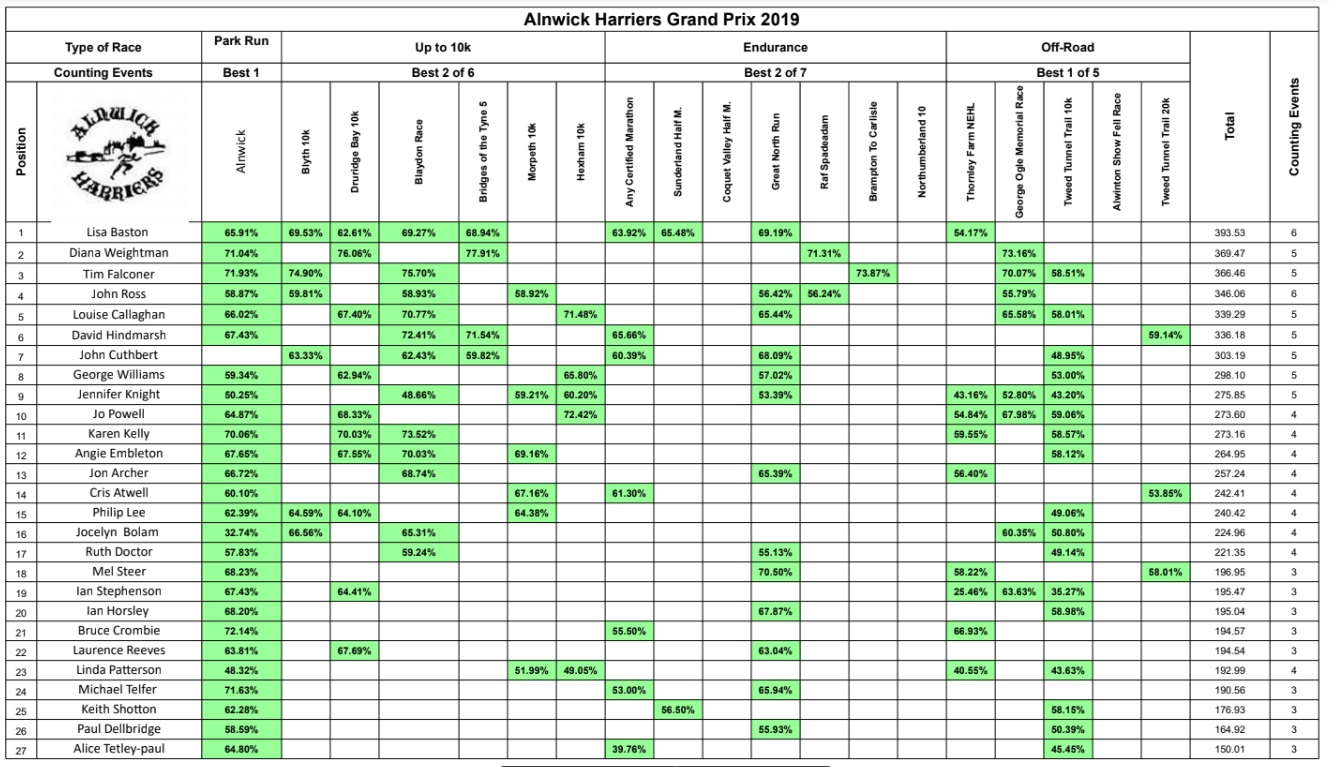 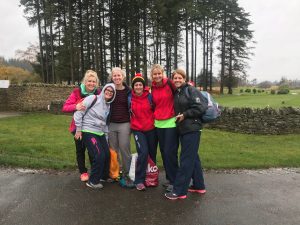 Four female Alnwick harriers travelled to Slaley Hall’s outstanding 1000 acre estate near Hexham  for the Slaley Hall 10k trail race on Sunday 17 th November.
500 runners enjoyed a challenging course with approx 530 ft of ascent through woodland, forest tracks and on the edges of the championship golf course including a good dose of squelch and mud to add to the fun !
Finishers were rewarded with a bacon or sausage sarnie and a hot drink in the hunting room of the hotel ! An enjoyable Sunday morning was had by all the girls !
Results:
47 Jo Powell  51.21
91 Frances Wilde 56.19
98 Emma Givens 57.22
124 Justine Norman 59.38

Posted on November 16, 2019 by David Hindmarsh
Any men who want to run at the North Easterns on the 14th December should e-mail Bruce Crombie
brucecrombie1972@gmail.com
Prior to the  20th of November
Posted in News | Leave a comment

Leila Thompson (U13) competed in her first winter season indoor event this weekend. Leila had a great day long jumping a personal best of 3.88m. However, her best was to come throwing a new Club record of 8.87m in the shot put. This fantastic throw won the competition and achieved the AAA (amateur athletic association) grade 1 standard for her age. Leila is now only one of four Alnwick athletes ever to have gained this. A fantastic achievement!

The Junior harriers had a great weekend in the Schools cross country events. On Friday in the area competition they won 7 of the 8 races. Over 80 children took part from the Duchess High School facing competition from 7 other North Northumberland Schools. On Saturday there was further success for the U15 girls’ team who were competing in the second round of cross country cup. The regional championship was held at Middlesbrough where the girls placed an excellent third. Their team has now qualified for the National final in Sheffield next month.

Posted on November 12, 2019 by James Willoughby

There has been some movement in the 2019 Grand Prix following the Hexham 10k and other races.

Four Harriers have moved into or consolidated their top 12 trophy positions since the last update.

John Cuthbert’s PB in the Chicago Marathon has seen him move from 11th to 5th, George Williams from 14th to 6th, Jennifer Knight from 9th to 8th and finally Jo Powell from 17th to 9th.

Our penultimate Grand Prix Race is the 68th running of the Brampton to Carlisle Road Race on Sunday, November 17.

Also, a reminder that the last counting Alnwick Pastures Parkrun is Saturday, December 7. 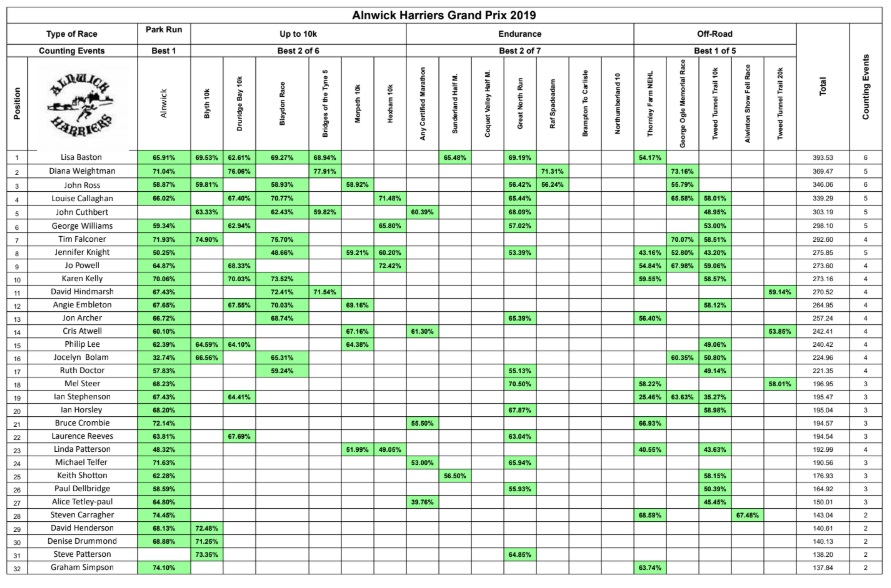 Posted on November 1, 2019 by David Hindmarsh

It is with great pleasure to announce Sunday the 19th July 2020 is the day for our 41st Coastal Run.  We will be starting at Beadnell Bay and following the Coastal Path to Alnmouth Beach,  a distance of  approximately 14 miles.

This year’s registration will take place on Thursday 23 January 2020, and is again being managed by Results Base Ltd for our online registration. Timings and details of registration will be published nearer the date, so please follow our website and facebook pages for all up to date information.

Please contact Laura McLean, ahcoastalrun2019@gmail.com the race director for any queries regarding this event and not through our club secretary.

Here are the latest race results for Alnwick Harriers. 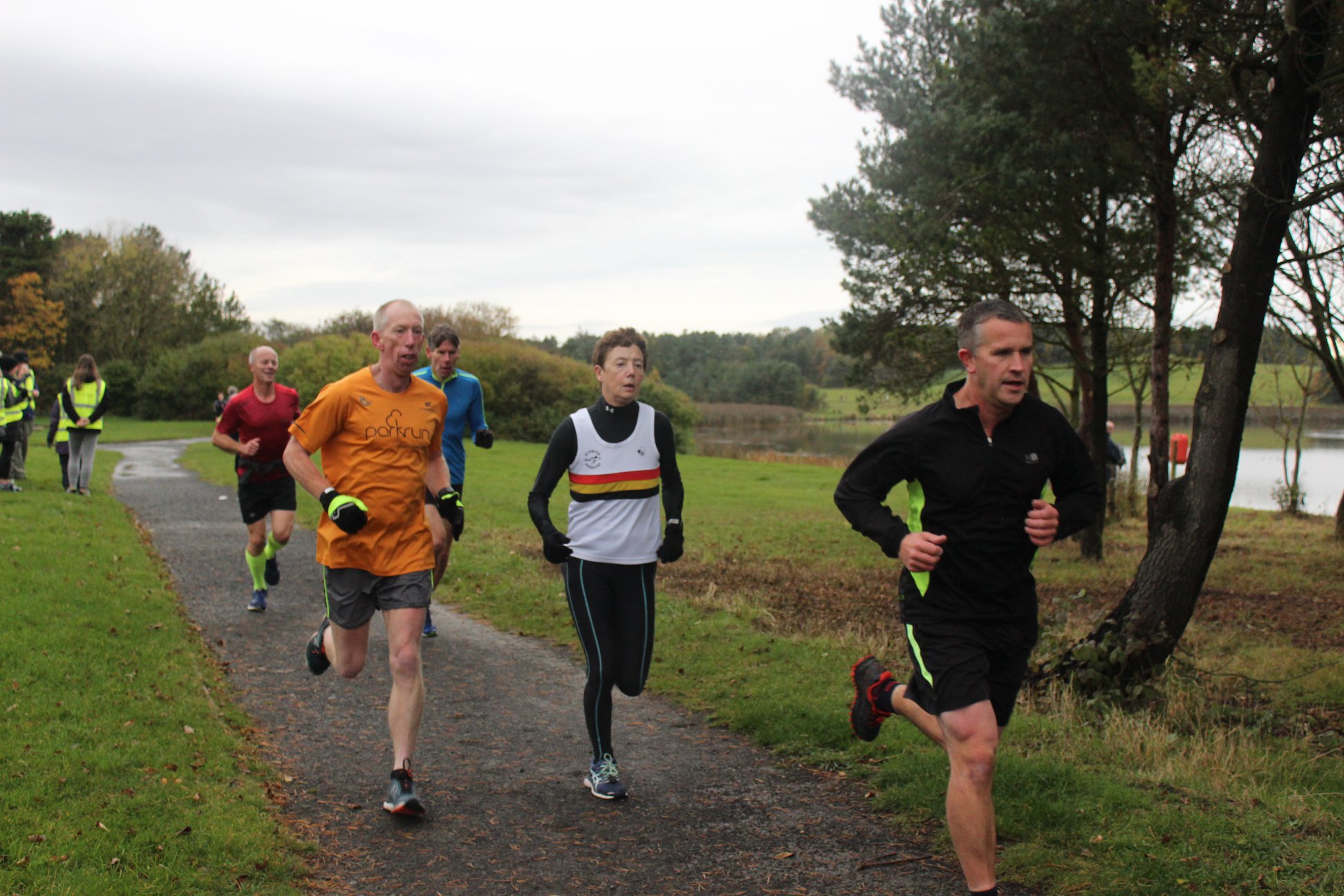 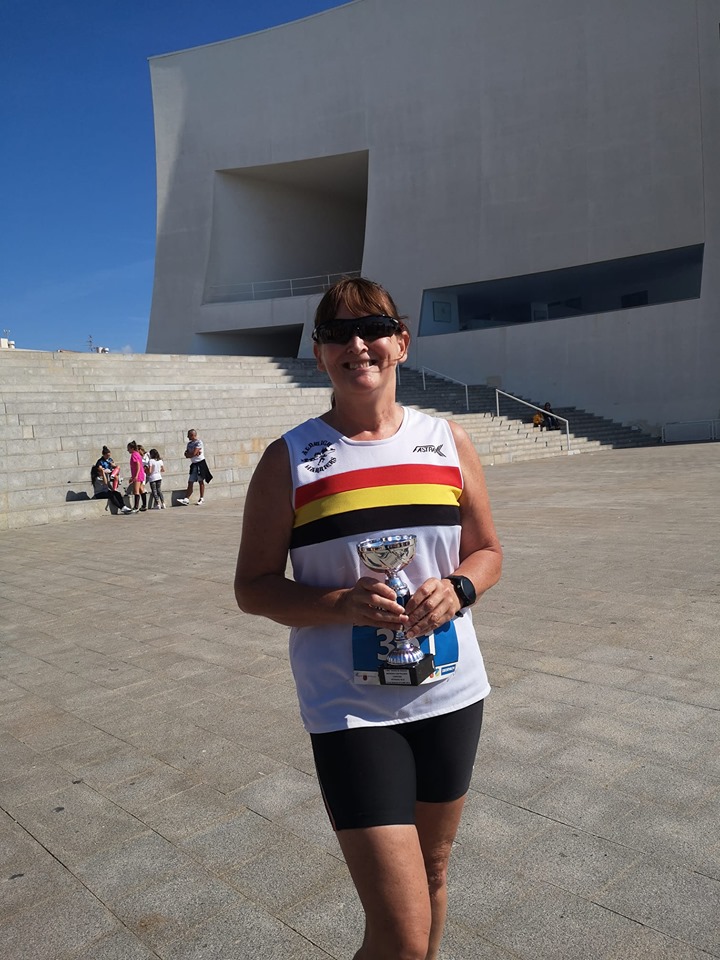 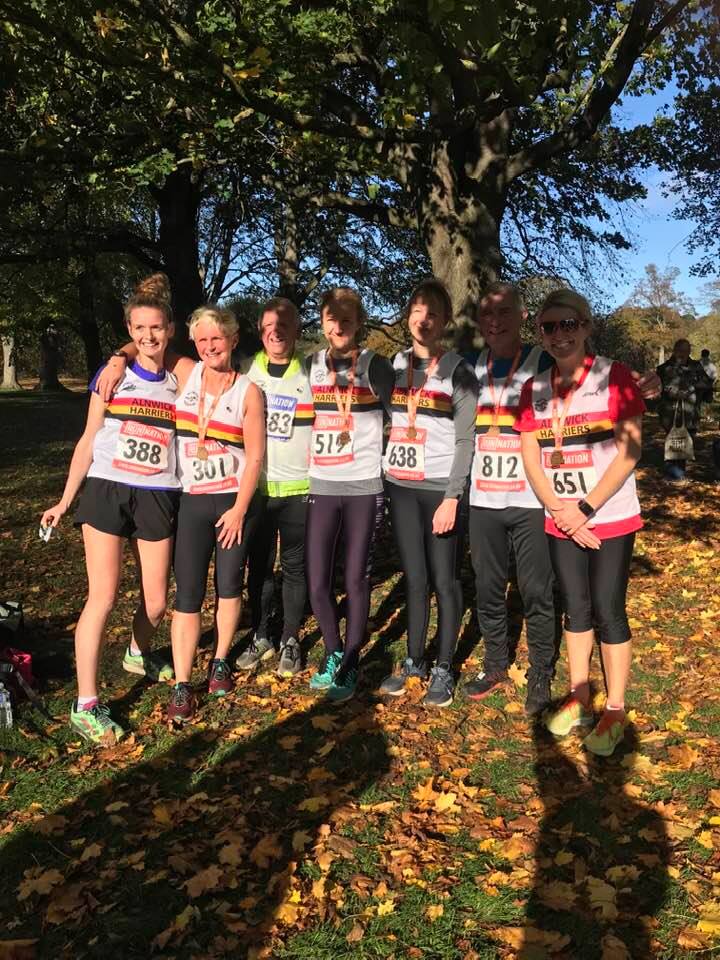 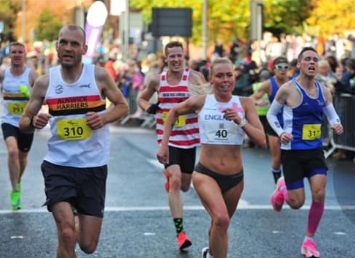