For this year only, the Grand Prix is offered in a more flexible format and further details are provided in the link below. So to all the Alnwick Harriers out there, its time to dust off your racing flats and get your calculators at the ready!

Club vests need to be worn for all Grand Prix races, except for the Pastures or Druridge Bay parkruns. A total of your six best WAVA scores will count towards your overall total from the following four groups:

2-Up to 10k. The best 2 WAVA scores from the following races will count:

3-Endurance. The best 2 WAVA scores from the following races:

4-Off Road. The best WAVA score from the following races will count: 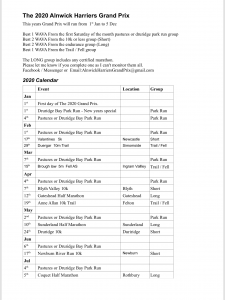 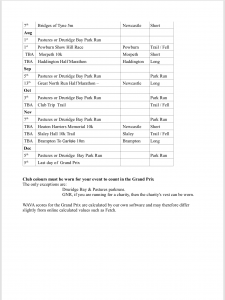 Club colours must be worn for your event to count in the Grand Prix
The only exceptions are:
Druridge Bay & Pastures parkruns.
GNR, if you are running for a charity, then the charity’s vest can be worn.

It uses world record information set by people of all ages, male and female.

Here are some more examples of what the scores would be for 40 and 42 minute times, for a 10k race, for 40 and 50 year old male and female runners:

The basic idea is to give everyone the same opportunity based on a performance level for your age.

The final example illustrates how the first five places of 2011’s Les Allcorn 10k would have been recorded using the handicap system.

Lesley Miller’s time of 44:53 was the performance of the day and would have moved her from 8th fastest  to the highest scoring Alnwick Harrier – 78.00% in the handicap format.

Next years league will once again be calculated using your 6 best scores.

The above example also shows how important every inch of your race will be as the Handicap System has resulted in a difference of only 0.02%, between 3rd and 4th positions .

A major objective of the Grand Prix is to see as many red, black & yellow hoops as possible, promoting Alnwick Harriers on the north east roads, fells, trails and mud! Remember to gain points Harriers must enter races as an Alnwick Harrier and wear the club colours.

Racing is one of the best forms of training possible, granted that we can’t all be ‘bombing along’ at the front and the WAVA Handicap system gives you all a genuine chance to have fun and perhaps win a prize, into the bargain!

So get involved and start planning your racing calendar for 2014 now! Please note that in the unlikely event of a tie, at the end of the Grand Prix, the Committees decision is final. Regular Grand Prix updates will be provided, throughout 2014, via the website and at Willowburn.

2011 saw the first ever Alnwick Harriers Grand Prix, which took place over 14 events throughout the year. Members were split into 4 divisions, 2 male and 2 female. Points were awarded like this-10 points for 1st finisher in each division, 9 points for 2nd finisher, etc.

Winners are shown below!

Many thanks to John ROSS for organising the 2012 Grand Prix which used the WAVA system for the first time! Congratulations to Jim LILLICO for his victory. Final results are here:

Well done to everyone for taking part in 2013’s Grand Prix series. Races were held over distances from 5k to half marathon, whilst there were also opportunities to gain extra WAVA points with your best Parkrun, 2 best marathons and even more bonus points for taking part in more than 9 counting races. Well done to Dave HINDMARSH for his last minute victory! Final results are here:

Well done once again to John ROSS for sorting out the 2014 Grand Prix series and collating all the results. He is doing a grand job! Many congratulations to the runaway 2014 winner Phil HEMSLEY!

As always many thanks to John ROSS for doing a superb job all year. Well done to the runaway winner Lesley MILLER!!!