The last few days have seen some superb performances by Harriers, with perhaps the pick of them being from Bruce CROMBIE on Sunday 22nd June at the Windy Gyle Fell Race. Earlier in the season Bruce won the inaugural Hedgehope Hellraiser race, and he has now followed this up by being victorious at Windy Gyle. He is fast becoming one of the big boys in north east fell running, taking some notable scalps on his way to this 25 second victory, which all bodes well for the Chevy Chase in a few weeks time. There were also excellent performances by Adam FLETCHER who finished 5th in this decent field and by Graham SIMPSON who was 11th. Andy SQUIRES also took part in his 3rd race in a week, though tweaked a calf during this race. Results:

Back on Thursday 19th June there was another victory for an Alnwick runner, this time in the Norham RC organised Castle Bank Time Trial, a 6k multi terrain race including road, paths and steps. Carl AVERY wore the Alnwick vest for the first time and bolted up in fine style, winning the race comfortably ahead of 2nd place Bruce CROMBIE. Carl is a Morpeth Harrier, though is a 2nd claim member for us, training regularly with Geoff CAMPBELL’s Wednesday night group. Steve PATTERSON was an excellent 4th, meaning that we comfortably won the male team prize. Results: 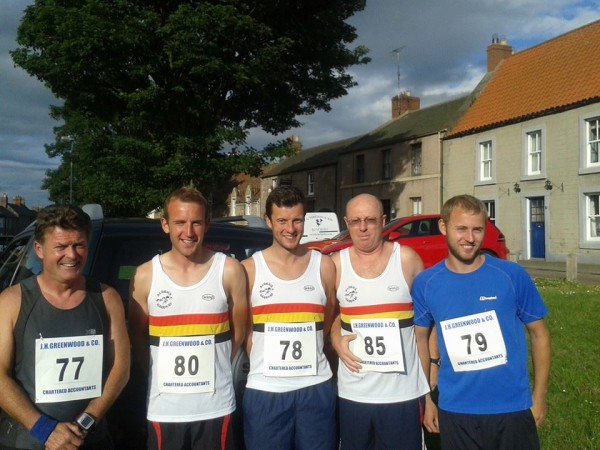 There were 4 Harriers in Parkrun action on Saturday 21st June. Andy SQUIRES was quickest of our runners at Newcastle in a Parkrun pb, an event which also saw Chris GRAHAM carrying a 10kg weight in preparation for the Paras 10 later this year. Over at Workington Gay and Richard EASTOE both ran well, with Gay winning the female 60 category as always! Results: