There were 5 happy smiley Harrier faces at the North Shields Poly organised Clive Cookson 10k on Wednesday 21st May. Biggest smile of all was Steve PATTERSON’s as he  was 1st Harrier to finish the fast course in a big pb of 38.46. Next home in his fastest 10k for quite some time was Andy SQUIRES, followed by Mark DOCTOR who also notched a 10k road race pb (not including his recent glorious 10000m track performance), knocking a massive 1 second off his previous best from 2011. Mark DOUGLAS was next home also in a big pb, though his time could have been quicker if he knew how to tie his laces. Last of the Harriers quintet, also in a decent time was Phil LEE. Well done to all. 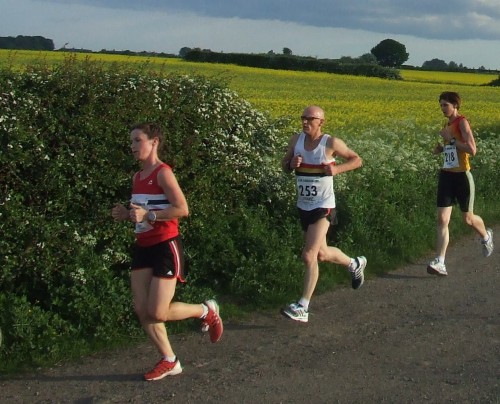 The following night Phil BASTON travelled to West Yorkshire to take part in the Apperley Bridge Canter, organised by Horsforth Harriers. The race is a hilly, multi terrain race billed as a 10k but much shortened due to issues with the course. Phil completed the 8.5k route in 40.21 to finish 152nd of the 375 competitors.

Ian SIMON was the latest Harrier to take part in a track meeting on Monday 19th May. Lets hear what his thoughts were:

“Good night racing on the track at Monkton, Jarrow. Inspired by Mark DOCTOR, it was my first time out as part of the North East Masters Athletics Association, who run a series of Monday night events for the more mature athlete.

I’ve never done a track meet before, so I was a bit nervous and not sure of what was going on but everybody was friendly and kept me right. Each meet has a slightly different line-up of events, so I opted for the 3000m, followed by the 400m as a cool-down…(!).
I’m targeting a fast mile later in the season, so enjoyed getting my legs ticking over. Reasonably happy with my performance – 10:37 for the 3k, 68.9 for the 400.