Congratulations to the 3 Harriers who took part in the Edinburgh Marathon on Sunday 27th May. Once again the race was run in scorching conditions, but this did not stop the trio posting excellent times. David NOLAN was first for the club finishing in 3.22.29 in his first marathon, whilst Sarah SYERS smashed her pb by 4 minutes. Harriers results:

Meanwhile 2 Harriers ran well earlier on in the day in the Half Marathon, in slightly cooler conditions. Harriers results:

4 Harriers took part in the 5k Newcastle Parkrun on Saturday 26th May, the highlight being Sam EMBLETON smashing the womens club record in her first Parkrun. Sam beat the previous best by Helen JONES by well over half a minute finishing in 19.50. Three other Harriers had good runs in the beautiful conditions including Ruth DOCTOR who missed out on a pb by 6 seconds: 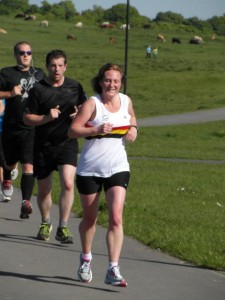 For a full list of club records and fastest times of 2012 over various distances go to the “ABOUT” section on this site.