Dave HINDMARSH put his recent Boston Marathon experience behind him in the Druridge Bay Marathon on Sunday, 20th May. Dave finished the race, organised by North East Marathon Club, 15th of the 43 finishers in 3.35.45. Mike TELFER and Cris ATWELL also took part in the race representing the host club. Mike was 9th in 3.24.56 and Cris was 22nd in 3.51.08. Jim LILLICO took part in the half marathon event finishing 7th of the 23 finishers in 1.34.21.

Well done to the 5 Harriers who took part in the 7.5 mile Sunderland Strollers Pier to Pier race on Sunday. 4 of the 5 took part in last years race and all of them improved on last years times, with David BARTRUM improving by nearly 5 minutes. Harriers results:

Meanwhile John ROSS warmed up for this Wednesday’s Clive Cookson 10k by making the trip to Manchester to take part in the BUPA Great Manchester 10k. John finished 2881st in 46.29. 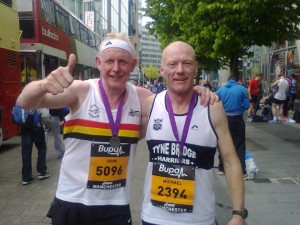 Back on Tuesday, 15th May Gay and Richard EASTOE took part in yet another race, this time the Moorclose 10k in Workington, Cumbria. Gay pipped Richard to the line in 117th place in 55.25, finishing one place and one second ahead of him. 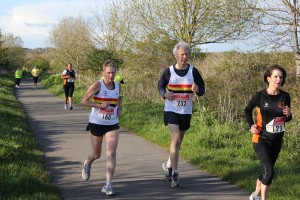 Photo courtesy of Dobo at www.fellrunner.net.