To commemorate 25 years since Alnwick hosted the first European XC championships, on Saturday Alnwick Harriers had the honour of hosting the 114th NECAA XC Championships. The spectacular venue presented some challenging hills and runners had to battle a brutal wind for the first kilometre of the 4K lap.

The distance for the senior women’s race was 8K and Alnwick had nine senior women competing over the two laps. Jo Powell was first home for the club, with Diana Weightman a few places behind. Competing in her first cross country for the club, Ellie Hulbert had a fabulous run to be Alnwick’s third team counter and Caro Fentiman finished just ahead of Justine Norman to be Alnwick’s fourth counter, with Emma McGee seventeen places back. Also competing in her first ever cross country for the club, Karen Leeson had a strong run finishing closely with Sue Skirrow and Linda Patterson. 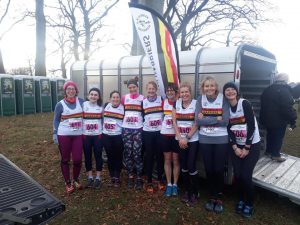