Posted on October 7, 2019 by David Hindmarsh 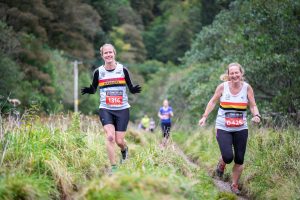 30 Harriers ventured over the border to participate in the stunning but challenging Tweed Tunnel Trail Race in and around picturesque Peebles. As well as ascending some barely runnable hills with fast descents, the race also features a unique 1/2 mile through a disused railway tunnel decorated with ‘disco’ lights.

Ian Simon was first Harrier home in the 20k Race finishing in an impressive 14th overall out of 455 runners with a time of 1.38.13. Mel Steer was our only female in the longer race finishing in 163rd overall and 5th in the F50 category.

In the shorter 10k race, Grand Prix bandit Tim Falconer returned from a long taper in the sunshine of California to finish as first Harrier home in 55.08. His chip time was just ahead of John Cuthbert who would have finished faster if he hadn’t have been distracted by the disco lights and begun waving his hands above his head and shouting “aceeed” as he is frequently seen doing across the fashionable dance floors of Northern Europe. 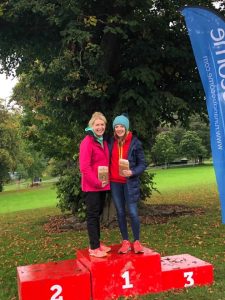 Jo Powell ran a great race to finish as first female Harrier and second F40 overall followed by Angie Embleton who was third F40. Karen Kelly finished as first F50, albeit there was unfortunately no trophy to recognise this great achievement.

Here we can see Jo and Angie with their very tasteful wooden trophies.

Our merry band of runners followed the run with a lively meal at Francos’s Italian Restaurant and all agreed that the race had been on a fantastic course and was well organised event. I personally thought it had the best ever soundtrack at a running event. Who needs Chariots of Fire when you’ve got Fontaine’s DC???

Also a special shout out to the lovely lady who was making sure the Portaloos were clean and well stocked!