Posted on September 24, 2019 by David Hindmarsh

On Monday night three Alnwick Junior Harriers were awarded trophies for their success in the North East Athletics Grand Prix. The athletes competed in six evening athletic matches and scored points for success in their chosen events. The competition was held on Wednesday evenings over the summer months.

Talia Thompson (U15) had another successful year once again winning her age group, she competed in Shot, discus, hammer and javelin! Talia also won athlete of the match at the fourth fixture where she threw 10.95m in the Shot put. This award is particularly difficult to achieve as the athletes have to outperform all the junior and senior age groups to win.

Leila Thompson in her first year of U13 competition faced a tough challenge in a strong field of girls and finished in overall 2nd place. Oscar Chisholm competing in sprints and throws also had an excellent season finishing as third place U13 boy. Excellent results for the juniors. Twenty north east Clubs and over 200 athletes took part in the competition.

Also that night the presentation for the North East Throws competition took place. Leila Thompson took first place in her competition and Talia was third. 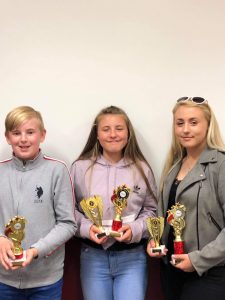 The final athletics competition of the summer athletics season is the North East Pentathlon held at Monkton Stadium, Jarrow. Junior athletes compete in hurdles, long jump, high jump, shot put and 800m. The older age groups are required to run 200m, long jump, shot put, discus and 1500m. Ollie and Finlay Telfer who are regular annual competitors both competed well. Ollie finished 1st U17 and Finlay was 3rd North East U15 Boy. Both achieved personal best performances in 3 out of their five events.

Reports thanks to Mike Telfer