The weekend got off to a really good start for Dominic HARRIS at the Temple Park 5k at South Shields on Friday 19th May. On this renowned fast course Dom smashed his previous 5k pb to finish 24th of just over 100 runners in a brilliant 17.47. Dom won the Most Improved Male Award last year and is still improving!

The following morning Harriers were in action again at various parkruns. The highlight was Carole PAGE finishing 1st female for the 28th time at Druridge Bay. Carole was just outside her course best completing in 21.17, whilst Alice TETLEY-PAUL was 3rd female home. Elsewhere Tim FALCONER was agonisingly just over 20 minutes at Hackney Marshes, David HINDMARSH ran well at the Rising Sun Parkrun at Wallsend, Zoe ROBSON was at the Nonsuch Parkrun in Surrey and Richard EASTOE was at his local Workington Parkrun. 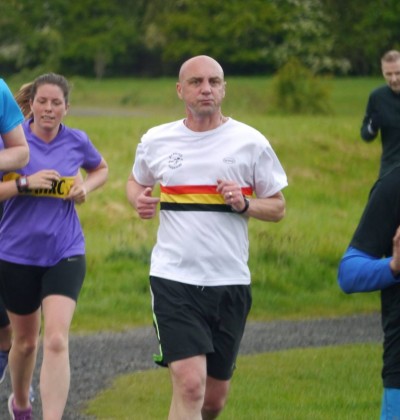 The following day Mel STEER and Mairi CAMPBELL ventured north of the border to tackle the Stirling Marathon. Both ran well with Mel running the fastest marathon by a female Harrier so far this year, 4.05.17, whilst Mairi came home in 4.36.49.

Also that day 3 Harriers were in action in the tough Border Trail Race, a new event set up by Woolers Glen McWILLIAMS. Pauline AITCHISON and Alison WRIGHT ran together and finished in 4 hours 8 minutes, whilst Alice TETLEY-PAUL was round in 5 hours 5 minutes.

Finally back on Wednesday 17th May Gay and Richard EASTOE took part in the Eaglesfield 5k near Cockermouth. The pair ran together with Gay coming home in 59th place in 29.07 and Richard one second further back in 60th.

Above photo is of Cris ATWELL at Druridge Bay.